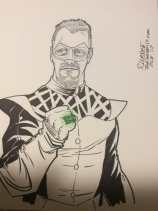 Yes, you read the title right. Since I became #NeverTrump, I have the strength of three men! … Well, I actually have the voting power of three voters. Still not too shabby, but I guess I won’t be donning a mask and cape to fight crime; just to go to the odd comic book convention. See, it occurred to me that there is a funny little side effect to one of the major arguments that gets leveled against me by the Pro-Trump crowd. The argument is this:
“If you don’t support Donald Trump, that’s the same as voting for Hillary!”
This is a bad argument, of course. It’s false, dishonest and manipulative, but, for the moment, let’s give it more consideration than it actually deserves. I recently received a response to my writing on this subject in our local paper where I was told that my refusal to support either Trump nor Hillary was the same as me voting for Trump (obviously a Hillary supporter). We’ve all seen the meme: 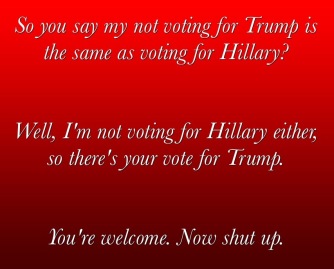 But I got to thinking about this. Trump supporters see that first statement as valid and true. But, if you employ logic when examining it, there is exactly the same amount of evidence and substance (namely, none) for that second claim as there is for the first, so let’s take a look at what that actually means:
First, every American who is eligible to vote for president (those who registered to vote, are not felons without restored voting rights, are 18 or older and are not dead…sorry about the last one, Democrats) has exactly one vote to cast. Are we agreed on that? Ok, good. (I’m assuming we all agree on that.)
Now, if not voting for Trump is a vote for Hillary, then it is equally true that not voting for Hillary is a vote for Trump. That means that, by not voting for either, I’m actually voting for both. That means I actually have the power to cast TWO VOTES; twice that of a normal voter!
Stay with me, people! We have one more leap to make here.
So, what happens if I vote for someone other than the “Big Two”? Let’s say I decide to vote for Gary Johnson or Darrell Castle or even write in Ted Cruz or Marco Rubio…or vote for Pikachu. (I know…he wasn’t born in America, so he’s not eligible, but everybody’s looking for him across America right now, so there’s that…) Now, I STILL haven’t voted for Trump or Hillary, so that’s the equivalent of voting for both, so I have effectively cast two votes…but I also cast a vote for someone else. In effect, I have cast THREE VOTES in one election! I have effectively become more powerful than any voter who votes for either Trump or Hillary. I have the power of three voters…and I didn’t have to get bit by a radioactive poll worker!
I figure by this point I should have some #NeverTrump people at least grinning…and I hope laughing. It’s true that this is all silliness, but there’s also a point here. You see, I figure any Trump supporter reading this has gotten really irritated and has maybe even started to change color a little. A least, I can hope they are. “This is ridiculous and unrealistic,” I imagine them grumbling…and they’d be right. It is ridiculous and unrealistic, but the importance is where it’s all ridiculous.
What I’ve used here is actually a debating technique called “Reductio ad absurdum”; latin for “reduction to absurdity”. The idea is simply to take a concept to its ultimate, and usually absurd, conclusion. But the truth is that it’s not the final extreme conclusion that my vote actually counts as three that’s absurd. That’s actually just a logical conclusion based on the original premise. This argument that not voting for ‘X’ is the same as voting for ‘Y’ is dishonest. Your vote is something of value to be spent, much like money, where you decide it should go. Have you ever told someone that, if they don’t spend their money to buy a Bible, that’s the same as spending their money to buy porn? Of course you don’t, because it’d be absurd…and so, is this statement about voting. However you choose to use your vote, it’d doesn’t have a list of side-effects connected to it likes Cialis commercial.
So, if it’s such a bad argument, why do the Trump people keep going back to it like a touchstone? Do they not realize that it’s a flawed argument? Many don’t. For them, it was used to manipulate them and now they embrace it as gospel and use it against others. But there are those who know it’s dishonest and don’t care. For them, if it gets people to go along with their agenda, then the truth be damned.
Of course, if that isn’t quite enough to get people in line, they’ll amp it up a little and, when you continue to refuse to support Trump, they’ll just accuse you of actually being a Hillary supporter or even a closeted liberal. Sound familiar? It’s the same thing the left has been doing for decades, except their accusation of choice is to call us racists, but the purpose is exactly the same in both cases; to force people to do what they want them to regardless of their convictions or principles or even any concept of right and wrong.
This actually comes from Saul Alinski’s 12th Rule for Radicals: “Pick the target, freeze it, personalize it, and polarize it.” Basically, embarrass, vilify and shame those who stand in your way…until they don’t stand in your way anymore. Yes, I’m saying that there are those who call themselves conservatives who are acting in accordance with the teachings of Alinski. The practices of the left are virulent and, when we play with them, we run a huge risk of getting infected with something we REALLY don’t want.
But that’s a subject for another day. I only bring it up to reinforce the point that this argument that not voting for Trump is the same as a vote for Hillary comes from a very dark, dishonorable, dishonest place. It has no validity and it’s only purpose is to bully you into doing something, no matter what your heart is telling you is right.
The next time someone tries to bully you this way, consider trying this: Do your best Star Wars Obi-Wan Kenobi voice (Sir Alec Guinness…he was way cooler), smile and say, “If you strike me down, I shall become more powerful than you can possibly imagine.” These people won’t get the humor in it; they have no sense of humor when it comes to their spray-tanned messiah. I can also pretty well guarantee they won’t get the pop culture reference and it’s always fun to watch people like that flounder trying to make sense out of such a nerdy reference!

11 thoughts on “Being #NeverTrump Gave Me Super Powers!”