I often contemplate how far we’ve strayed from the wisdom of our founders. I’ve talked about their distaste for political parties, how they’d be horrified by the shift of the power balance in Washington and the erosion of our liberties, etc. But today, I want to talk about the strawberry and chocolate flavored taste of fascism that we’ve been poisoning ourselves with for years. Of course, I’m talking about that state mandated day when we are forced to display affection or face the consequences for failing to comply to the will of the oppressive collective matriarchy that we live under.

In other words, Valentine’s Day.

I know that I tend to steer clear of controversial subject matter, but, dammit, it is way past time that somebody speak truth to power and stand up to the mammoth power players who’ve kept us in submission; namely:

Lead by Hallmark, it was Big Card that started this travesty with their pre-written sentiment, indoctrinating us to express the thoughts and feelings that they’ve decided are appropriate. These cards trap men into a seemingly endless cycle of looking at the same cards over and over at a local grocery store/gift shop/convenience store/gas station. (By the way, the guy at the gas station is in worse trouble than he can even contemplate…at least, until he comes home with that card, wilted flowers that smell vaguely of gasoline and a bag of Corn Nuts and soon finds himself sleeping in the garage with the scratchy blankets. Incidentally, he’ll wake up in the morning smelling vaguely of gasoline, too.) The men shamble sadly around the card rack trying to find a card that says something that’ll make her happy, but won’t over-promise something that he’s not ready to follow through on…like a deeper commitment or promise to take out the garbage more regularly.

Plus, there’s those who are single on Valentine’s Day. You might as well label that group as lepers and shove them in a cave, like in Ben Hur.

I’m not even bitter that Hallmark refused to print my ideas for alternative V-Day cards that I pitched to them: the “It’s just one day…and at least you didn’t spend all your money on presents” card, the “If you’re single, you can’t be cheated on” card and, of course, the flirty yet non-commitment oriented, “You suck less than most people” card. I’m not bitter, but I could’ve been rich!

Lead by 1-800-FLOWERS and supported by pushers in every town across the nation (Seriously, we go after drug cartels for this business model, but not these guys!), they sell four times the normal amount of flowers on any other day for at least twice the price. If this was a pharmaceutical company doing this with a drug to cure cancer, we’d be calling for them to be publicly executed in the town square! Plus, they make sure that every color of rose means something different. If your wife wants to be assured that your relationship is multifaceted, you could throw her into an epileptic seizure from the splash of colors in a bouquet designed to tell her that she’s the love of your life, your best friend, your modest angel, your brazen hussy, unattainable, innocent, pure, gonna get some, always right…even when you know she’s not, doesn’t look fat in those jeans, etc. (Ok, I may have made up a few of those, but I’m not telling you which ones.) 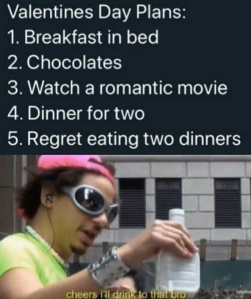 Lead by…actually, let’s leave Big Chocolate alone. It may be shaped like hearts, but it’s still chocolate and not it’s fault what shape it’s been poured into. Besides, most vegans don’t get upset about chocolate being poured into the shape of bunnies on Easter. Plus, you can pick up Valentine’s Candy the day after for half price at Wal-Mart! That’s showing real love through action right there! Big Chocolate takes good care of us…all year round! 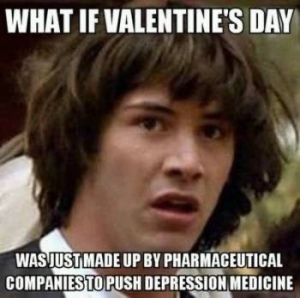 Lead by…well…Julia Roberts, Jennifer Lopez and Ryan Gosling, these monsters convince us that love comes from a storyline formula that you better follow if you don’t want to end up alone, ringing a bell in a tower for the rest of your life. That formula is: Boy meets girl. Boy and girl hate each other. Boy and girl torment each other instead of just leaving each other alone like most normal people who don’t get along would. Boy and girl find out something they have in common, like they both lost parents at a young age or they both like to eat at the same deli where the management is fine with them making loud orgasm noises during the lunch rush or one is a hooker with a heart of gold and the other likes hookers (I’m not clear on whether the condition of their hearts altered his affection or not). They give these movies names like “Sleepless In Seattle” or “Honeymoon In Vegas” or “Bound In Boston”. Actually, I think that last one doesn’t qualify as a romantic movie…unless you like whips, chains and people in cages. If you do, then Happy Valentine’s Day! No judgement here…

They even made a movie and called it “Valentine’s Day.” Hollywood: home of creativity and original storytelling! Hollywood goes out of it’s way with these movies to train us as to how to behave while injecting us with envy if we can’t get our crap together enough to find the kind of love that ends with you floating on a door in the ocean while your soulmate sinks to his death…in spite of the fact that there was CLEARLY enough room on that door for both of you. Personally, I like to watch “Fear and Loathing in Las Vegas” every Valentine’s Day. I challenge you to find anyone who demonstrates more love than those two do for their drug stash.

Quotes From The Experts

Finally, I talk a lot about our Founding Fathers, but, today, I’ll be talking about the wisdom passed down from our Founding Fathers and Mothers…of music. They warned us of the dangers of love and we should pay heed to their words in the face of this day that promotes it at the expense of our self-esteem, sanity and bank accounts. Listen closely to the wisdom of just a few of our greatest philosophers:

Starting with the elder statesman of subjects like this, Hank Williams illustrated the devastation love can inspire, “The silence of a fallin’ star lights up a purple sky. As I wonder where you are, I’m so lonesome I could cry.”

Def Leppard makes it clear that, “Love bites. Yes, it does. It will be hell.”

Alanis Morissette asked her ex if he had traded up when she demanded, “Is she perverted like me? Would she go down on you in a theater?” By the way, she wrote that about Dave Coulier (yes, the guy who played Joey on Full House)! That’s enough to put you off love…and possibly dinner…for a while!

Amy Winehouse wrote, “Oh, what a mess we made and now the final frame. Love is a losing game.” (And we all know that if Amy Winehouse said it, it must be right. I can’t think of anyone who had it more together

Then there’s the heartfelt words of Robbie Hart:

Powerful and heartfelt stuff from an icon of ‘80s wedding pop music.

Kelsea Ballerini points out the falsehoods of our Valentine mis-information: “I think cupid is stupid and violets are purple not blue…I hate catching bouquets, the honeymoon phase and letterman jackets don’t fit…your eyes can’t hold stars and you’d die if your heart really skipped…I hate pink hearts with glitter and Valentine’s dinner and roses just die in a week…we were drunk when we met so we don’t know our anniversary, whoops.”

Finally the great Tom Waits clearly said that… Actually, never mind. Nobody ever understood a word coming out of Tom Waits mouth. He was never accused of being clear, but I sure he had something poignant to say about love.

So, I’ll leave you with these final words of wisdom from the great philosopher, Bjork: “And if you complain once more, you’ll meet an army of me. You’re alright; There’s nothing wrong; Self sufficiency please! And get to work.” I don’t actually know what that means, but I think it makes you cool and cutting edge to quote Bjork…and I really want to be cool and cutting edge. Like Ray Wylie Hubbard would say, “Maybe that means I’m funky and cool…I seriously doubt that’s what it means.”

Honestly, I’m not really sure where I was going. I start talking about the oppression of Valentine’s Day and the Matriarchy and end up quoting Alannis Morissette?! If anyone expected this to be a serious article, this was just me getting weird and having a bit of writing fun. If you’re excited for Valentine’s Day, let me wish you a very Happy Valentine’s. If you have no plans and just don’t care for the pseudo holiday at all, let me leave you with this: Halloween candy will always be way superior to Valentine’s candy…and Halloween is only 260 days away!